In 1999 I embarked on creating what I wanted to be the ultimate list of songs to play in my car.  So I rooted through my music collection and pulled, opened, read, contemplated, played, meditated, listened and came up with ‘the list’. I then ripped the songs and burned them to a compact disc. Since then, I have owned three vehicles: a black Nissan Pathfinder, a black Jeep Grand Cherokee Limited and (currently) a silver Toyota Prius.  Whether one of its songs were cranked up loud on a drive home from the office, or playing in the background while driving cross-country with my wife, or if it was sitting patiently tucked away while I was exploring a newly-purchased album; this same silvery, scratched, sharpie-scribbled disc has been with me on every journey. 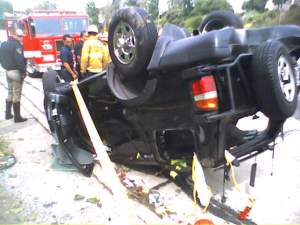 Rob’s Pathfinder upside down on the freeway

On a Saturday morning in 2005, shortly after the death of my father, I was driving down the 10 Freeway in Los Angeles when a man in a red Jeep Wrangler ran me off the road and kept driving.  I lost control of my steering and rolled about six times down a hill, with my car landing upside down on another freeway.  Unable to see oncoming traffic from my vantage point, I hung there uncertain of my future.  So I unclasped my seatbelt, fell on the roof and exited the vehicle without a scratch.  Days later I got another car and the disc came with me.  I kept driving and tomorrow kept coming.

Today, I decided to share this intimate list of songs with you, along with links to play them.  I hope they comfort, energize, daze and inspire you wherever you are going.  In the last twelve years, I have experienced great success, huge failure, extreme happiness and terrible tragedy.  I still don’t know where I’m going and I wouldn’t change a thing.  I leave you with one piece of advice: “If you keep driving tomorrow will keep coming.”

“It’s In The Way That You Use It” – Eric Clapton

“But It’s Alright” – Huey Lewis and The News

“Give to Live” – Sammy Hagar

“Gotcha (Theme From Starsky and Hutch)” – Tom Scott and the L.A. Express