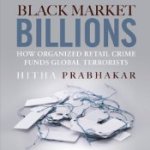 As I do the last few days of every April I was preparing for the International AntiCounterfeiting Coalition Spring Meeting.  Per my normal routine, I downloaded the agenda and devised a conference plan.  I noted that this year, unlike last, the conference had a host: Hitha Prabhakar, author of the new best seller Black Market Billions: How Organized Retail Crime Funds Global Terrorists.  In preparation of the possibility of carrying on a conversation with her, I decided to extend her the courtesy of purchasing the book on my favorite book site, audible.com.  Don’t laugh.  Come on.  You didn’t expect a narcissistic guy this hopped up on Starbucks to be able to sit down and actually read a book in three days, did you?  Besides, I love listening to non-fiction books.

Black Market Billions began with the author receiving an instant message from a friend offering her handbags for sale at a very attractive price.  Knowing that she is a full-time fashion reporter, the friend explained that the items he was selling ‘fell off the truck’.  What followed was a rabbit hole I was not expecting.  Most books that involve the world of counterfeit goods focus on the counterfeit goods industry (makes sense, doesn’t it?), but not this one.  In order to set the table properly to explain the role that counterfeit goods play in our society, Prabhakar first takes us deep into the varied world of shoplifting, human trafficking and Organized Retail Crime.

Most of my readers know I grew up in the anti-counterfeiting industry so one may assume I was schooled in all of the ways counterfeit goods are tied to the dark parts of the world’s economy.  One would be wrong.  I knew all about cargo theft, human trafficking, parallel imports and (of course) product counterfeiting and cybercrime.  Although I knew that retail boosting existed, I didn’t know how organized it was and that it is directly tied to the same black market.  I know we can watch an episode of reality television to learn something new, but Black Market Billions added a new view to even this easily jaded joker.  Early on, she moves right to the ties between counterfeit goods and radical terrorists.  Some of these stories were cases I had worked on, so it hit home as closely as it was well-written.

Moving through the chapters, I first was trying to figure out where she was going because the structure was not organized like most books, where there would be claim, evidence, conclusion, rinse, repeat.  She told stories of individuals through their eyes and provided case studies with insight into their effect on these individuals.  As the book unfolded I felt myself engrossed in a story that I thought I knew but saw it in a different light.  Perhaps this insight was partially due to the fact that it was written by a woman.  The stories felt personal and the street crime was real as it was woven into the larger picture of Big Fashion.

I recommend this book, not only for those interested in anti-counterfeiting, but anyone who reads true crime or even thrillers.  Keep an eye on this author as well.  To top it all off, I did end up chatting with her at a party, so my reading it in time was worth it!

Watching the Phillies play the Rangers w my bro!
The folks at ‘Yellow’ Cab need a serious marketing intervention.
A couple of the neighborhood kids came to our door selling their artwork. Told me the dog picture is my boy Mickey Mouse. Notice the $6 price tag on the other one. Nice to see the kids hustling.
The couch life.
Some stranger in a bar said I was handsome and asked to take my picture. I indulged him and this is the photo. I don’t disagree with him.
The Quincenera Waltz. My niece is the Princess in the blue.
Primer

One Man's Journey with Brain Injury

Helping people see the forest for the trees online, since 1999

Can you dig it?