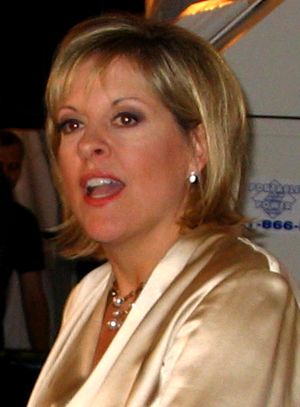 As I regularly search for shows on my TiVo using keywords that relate to my interests and work, I ran across a rerun of ‘Swift Justice with Nancy Grace‘ that originally aired on 2/28/11 entitled “An online rip-off; pit bull puppies”.  This was caught in my filter because the word ‘knockoff' was in the show's description.  In this episode, the first case was of a woman who had purchased a pair of Coach boots from a website buymerchant.com.  Upon receipt of the boots, the Plaintiff stated that she believed they were counterfeit and was entitled to a refund of $174 USD.  Whether the goods in this case were actually counterfeit is actually not even relevant to what I'm about to share.  What followed was some of the most irresponsible judiciary-slash-journalistic behavior I have ever seen.
Grace first examines the boots saying, “If these are fake, I'll buy 'em!  I'm all about fakes!”  She then hollers backstage, “Hey, bring me out my my ‘Frauda'!”  She giggled and looked back at the camera explaining, “My fake Prada.  I love it.”  As she brings the conversation back to the case on hand, she turns to the Plaintiff and uttered in a snarky drawl, “So… you don't like fakes?”
After picking up my jaw from the atop my Birkenstock I witness Grace call in her ‘expert'  to authenticate the boots.  This guy's qualifications were that he was a former employee at a Coach store.  Wait, it gets better.  As he makes his unconvincing case, Grace barks again and looks offstage, “Hey, bring me back my fake!”  Then she asks her expert to authenticate her ‘Frauda'.  He explains to her that it is counterfeit and that a real handbag of this type is of higher quality and would retail for about $1,500 USD.  Then Grace starts howling like a preacher with a bellyache with, “Fifteen… hundred… dollars?!?!?!  Do you know how long I've had this thing?  Five years.  That's a good quality bag!”  Just as I did, you are probably asking if this idiot actually admitted to purchasing illegal goods, defend it and then promote the behavior from her bench on national television.  Yes.  She did.  You can witness an excerpt of the event for yourself by clicking this link here: http://www.swiftjustice.com/case_files/2011-02-28
While much of the civilized world is trying to discourage this type of contraband activity, we have a nitwit like this adjudicating cases with her own television show, and doling out legal advice on CNN.  While Nancy Grace is hosting ‘Swift Justice', what she really needs is a swift kick in the rear end.