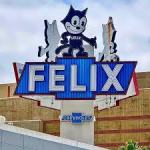 I was running an errand the other day in Downtown Los Angeles. As a big fan of classic Hollywood and detective fiction, I relish in the landmarks and mainstays, from the outdoor urban paradise of MacArthur Park to the crowds of bustling travelers at Union Station; from the authentic Hispanic heritage so beautifully displayed on Olvera Street to the architectural marvel of the Bradbury building (where, by the way, the most cinematic scene from “Blade Runner” was shot). But none of them tickle me as much as the iconic Felix the Cat sign atop the almost century-old Felix Chevrolet. END_OF_DOCUMENT_TOKEN_TO_BE_REPLACED

All Hackers Are Phonies (Sort of)

Posted: October 29, 2019 | Author: Rob Holmes | Filed under: Investigations | Tags: Hacking | Comments Off on All Hackers Are Phonies (Sort of)

Fixed fortifications are monuments to the stupidity of man. If mountain ranges and oceans can be overcome, then anything built by man can be overcome. ~ George S. Patton

Let’s face it. Unless you are trying to fix a busted drainpipe or something similar, your adversary is a living, breathing being. You can hunt deer, fish, a wolf, a serial killer, or even a hacker. And conflict can be easily boiled down to living beings and their tools versus other humans and their tools. END_OF_DOCUMENT_TOKEN_TO_BE_REPLACED

I saw the classic Hollywood disaster film The Towering Inferno in my twenties, two decades after it was released.  I watched it after I read Steve McQueen: Portrait of an American Rebel

by author Marshall Terrill.  In fact, after reading TerriIl’s book, I watched just about every Steve McQueen film that I had not yet seen.  One tidbit from the book that I found interesting was that McQueen and Paul Newman were such fierce competitors that it led to McQueen counting the lines in the script and demanding to one-up his rival in order to flex his new-found star power by having one more line than Newman.  END_OF_DOCUMENT_TOKEN_TO_BE_REPLACED

Background Checks – Who are the Slytherin anyway?  And why is Hogwarts teaching them the ancient and forbidden magic arts?  My wife is going through the process of re-watching all of the Harry Potter films.  She’s read all of the books ahead of the films, watched the films in the theater and now she has decided to see them all again.  Perhaps this is in preparation of the grand opening of The Wizarding World of Harry Potter next year at Universal Studios Hollywood.  Besides the first one that had Gary Oldman in it, I always encouraged Wifey to take a niece or nephew to see these movies.  Mission accomplished.  Somehow, though, I have a feeling I’m not going to be able to weasel out of attending the theme park.  To quote a great song of the 1970s “The Things We Do for Love”.  10cc had it right.   END_OF_DOCUMENT_TOKEN_TO_BE_REPLACED